Details below which target eye issues and the failure of most Merle breeders to have testing done on all breeding stock and offspring. They should provide eye CERF 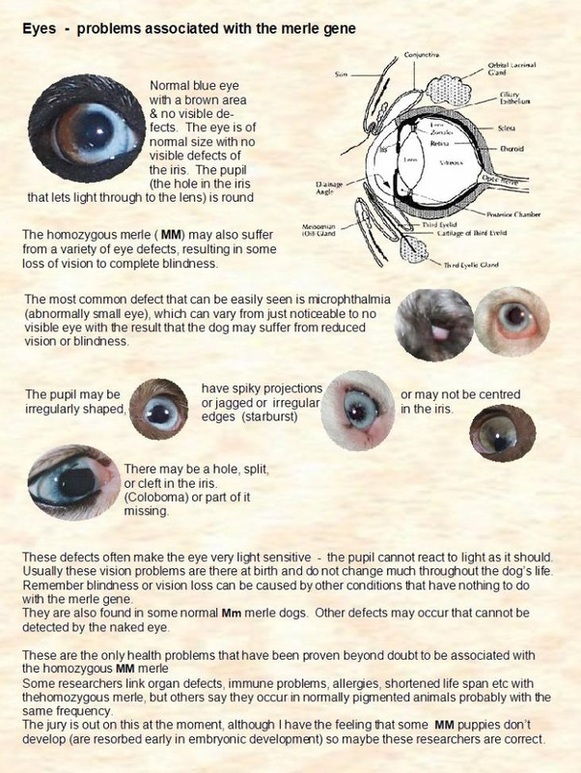 The Merle gene is responsible for a wide variety of beautiful coat and iris colors in the dog. This dilution gene acts to lighten the coat color. The dappling effect it creates is not evenly spread; rather, it is responsible for spotting of the coat and variations of the iris or colored part of the eye. A combination of colors may be found in one or both eyes. Colors expressed may range from a pale, light blue to greenish to amber. Unfortunately, the same gene that is responsible for the desirable coat and eye appearance is often responsible for many developmental eye defects. Breeds that have been identiﬁed as having the Merle gene include the Australian Shepherd, Rough and Smooth Collies, Shetland Sheepdog, Dachshund, Great Dane, Old English Sheepdog, American Foxhound and the Catahoula Leopard dog among others.

With respect to ocular effects, the Merle gene’s only manifestation may be expression of a normal, healthy blue iris (or irides). The blue appearance may also be as an ‘inclusion’ or as a partial segment of an otherwise brown eye (heterochromia iridis). A blue iris does not absolutely indicate the presence of the Merle gene; it may also be expressed in dogs carrying the piebald gene, such as the Dalmatian. There is no adverse consequence of the presence of the blue iris alone. Conversely, the other effects of the Merle gene may result in devastating blindness. The abnormalities affect either the front or back part of the eye or a combination of both. When the whole eye is affected, the condition has been referred to as Merle Ocular Dysgenesis.

Since it is understood that multiple congenital ocular abnormalities in the dog may be inherited, a brief review of basic genetics is in order. In any dog, two copies of a gene are present, one from each parent. For the purpose of this discussion, the Merle gene will be termed “m” and the non-merle gene will be called “M”. If both copies are the same for having Merle, they are termed homozygous (mm) or a double merle. A double Merle will be a predominantly white dog. If one copy is Merle and one is not, they are called heterozygous (Mm). One Merle gene copy is dominant over the non-Merle gene in that just one copy (Mm) will produce dilution of the coat and potentially different colored eyes, which is considered desirable in many breeds. A dog that is homozygous for non-merle (MM) is a normal, full-colored dog. In the Australian Shepherd dog, multiple ocular abnormalities due to the Merle gene occur secondarily to an autosomal recessive trait. Autosomal implies that this is not a sex-linked condition. Since a recessive trait is expressed only when homozygous, this means that affected dogs must be a double Merle (mm). Double merle animals may also have varying degrees of congenital deafness. The most severe abnormalities occur in homozygous merles with an excessive white hair coat involving the head region.

There are several ocular problems associated with the Merle gene. Microphthalmia is a congenital defect characterized by a small eye. Severely affected dogs may be blind at birth. Iris changes include thinning of the iris (iris hypoplasia) and possibly an eccentric or off-centered pupil, known as corectopia. An iris coloboma is an abnormality in the development of the iris that usually presents as a notch or cleft of the iris at the edge of the pupil. Another problem that occurs with the iris may be persistent pupillary membranes or PPMs. Pupillary membranes are present in the normal development of the eye in utero but normally regress within the first few weeks of life.  When persistent, they represent blood vessel remnants that fail to regress.

They appear as strands or sheets of tissue which may be present originating from the iris and attach to the iris, lens, or cornea. They range from being of minor signiﬁcance to causing severe vision impairment. A cataract, or an opacity, of the crystalline lens or its capsule is yet another possible heritable defect associated with the Merle gene. It may be found independently or in a microphthalmic eye. Cataracts, if focal, may only cause some impairment of vision, but when complete, blindness occurs.

The posterior segment (the back part of the eye) may also be affected.  Colobomas, or notch defects, may affect the sclera or the white of the eye. With a scleral coloboma or the presence of a thin sclera, a condition known as scleral ectasia, the vascular layer bulges out beneath the ﬁbrous coat of the eye. This is known as a staphyloma. These may occur in the front half of the eye, apparent as a bulge underneath the eyelid or they may be in the back of the eye, only visualized using special instrumentation. Choriodal hypoplasia or choriodal colobomas may also be seen.  In this condition the vascular layer at the back of the eye develops incompletely. Posterior segment anomalies may also affect the optic nerve. The function of the optic nerve is transmission of information to the brain for the interpretation of vision. A defect at this level may be so insigniﬁcant that a patient remains visual; alternatively, it may be the cause of complete blindness.

In addition to the optic nerve, the retina may also be affected. Retinal dysplasia is abnormal development of the sensory retina with focal folds or widespread geographic maldevelopment. This may occur in conjunction with retinal detachment. If the retina becomes completely detached, blindness ensues. In some dogs with a Merle coat, the tapetum or reﬂective layer at the back of the eye is missing. These dogs may have somewhat poorer night vision compared to an eye with a tapetum, but there is no obvious functional abnormality with these dogs.

With an array of problems that may have a common end result of blindness, informed breeders will not breed affected animals because those with ‘mild disease’ may still produce severely affected offspring. It is also understood not to breed merle to merle as this will increase the chances for double merles in the litter. As such, it is advisable to include more ‘solids’ or darkly-colored animals in a breeding program. It is always ideal to have breeding animals evaluated by a veterinary ophthalmologist to rule out structural abnormalities of the eyes. This can be accomplished via a CERF exam. CERF, or the Canine Eye Registration Foundation is an organization that tracks heritable eye diseases in dogs with the intention of monitoring breeding dogs, and with the greater hope of ultimately eliminating these conditions. A CERF exam is valid for one year. Ideally, dogs should be certiﬁed every year by a veterinary ophthalmologist to ensure that conditions that may be progressive or develop later in life have not appeared. These exams do not guarantee that the dog is not a carrier of genetic ocular disease; rather, a passing test proves that at that time no genetic ocular disease was diagnosed. If a dog’s status is unknown, it is strongly recommended not to breed. With respect to the Merle gene and ocular dysgenesis, these abnormalities are congenital and not progressive such that the problems may be diagnosed early. In fact, a puppy could be screened as early as six weeks old.

SOURCE: http://www.eyecareforanimals.com/animal-eye-conditions/canine/296-merle-gene.html
This is another link to eye issues with picture descriptions in any breed that has the Merle pattern.

When you see an 'AKC' blue eyed Miniature Schnauzer or ANY other fad blue eyed breed they have the same look to the eyes because they were cross bred dishonestly to get the blue eyes.