Breeding Parti to the Merle Pattern is BAD

Another trend I am seeing with Merle Miniature Schnauzer breeders is breeding Merle to Parti aka Pie-Bald. Parti means that the dogs BASE coat color is now masked or hidden under patches of White. The White could actually be masking an area of Merle in the base coat (cryptic merle). So you could have a Parti that appears NOT Merle patterned but is actually Merle and hidden within the White. So when you breed Merle to Parti with a hidden Merle pattern then you just bred a deadly DOUBLE Merle.

Another example of how you could breed a deadly DOUBLE Merle is when a puppy is born with a patch of Merle at the end of the tail or another small patch somewhere else and it is hard to see when they are newborns and even as puppies (this is also cryptic merle) but the rest of the coat looks solid. Then the breeder crops the tail or has the vet crop the tail... You think you have a Solid Puppy or a Parti with no Merle when actually it is fact a Merle but you cropped off any evidence. So you breed it to another Merle and BOOM you just bred a Double Merle and now at least half the pups are going to have eye, hearing, immune and organ issues.

​Examples in the bottom table below of cryptic merle.

NOTE: Other issues I am seeing with certain disreputable breeders is lying about Liver. Liver is a recessive gene that when bred to another Liver of ANY color that gene breeds TRUE. You get all Liver puppies from two Liver parents. It is impossible to get a Black nosed pup from two Liver parents. If they would lie about this then they would certainly lie about other things. 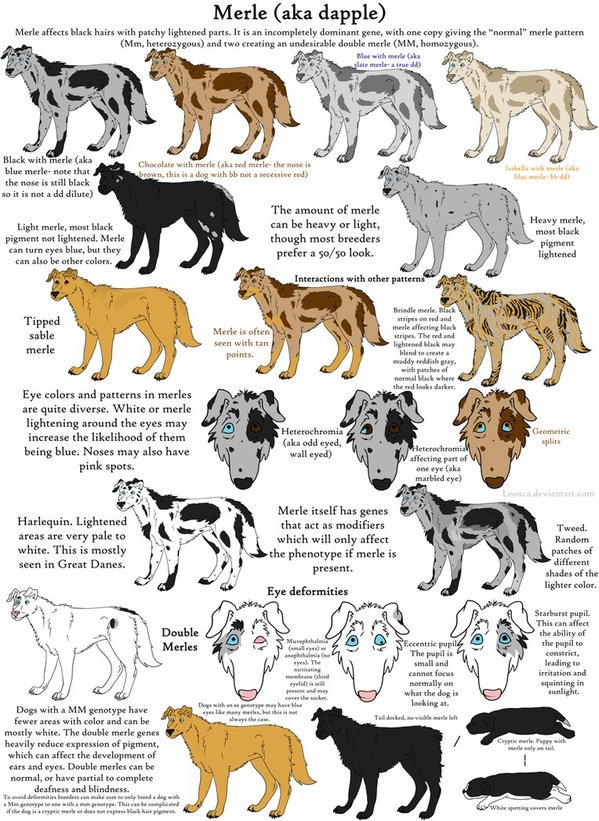